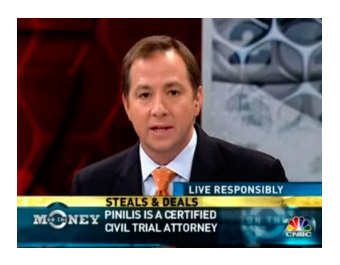 Billy Pinilis is a Consumer Fraud Lawyer that is certified by the Supreme Court of New Jersey as a Civil Trial Attorney. Less than 3% of the lawyers in the State of New Jersey have the necessary knowledge and experience to have earned this distinction. Mr. Pinilis has been recognized by the Super Lawyer rating service for multiple years as a “Super Lawyer“. He concentrates primarily on handling consumer claims, complex commercial litigation, class action litigation, and personal injury/negligence actions involving significant injuries. Mr. Pinilis has acquired a national reputation for excellence in handling consumer and consumer class action claims.

Mr. Pinilis has served as an adjunct professor at Seton Hall School of Law since 1995, where he currently teaches Consumer Law and New Jersey Practice. He often makes public appearances which include seminars and media.  He has been quoted in Bloomberg’s, The new York TImes, The Star Ledger, and other newspapers, appeared on CNBC, CNN, ad Tru TV (formerly Court TV).  In addiiton to his teaching, he has also lectured for a number of continuing legal education outlets including  the New Jersey Institute for Continuing Legal Education, where he has lectured multiple times on Consumer Law, and the Rules of Court. Mr. Pinilis long appeared as a regular guest on the Troubleshooter Show a nationally syndicated consumer advocacy radio talk show.

Mr. Pinilis is the sponsor of and a frequent contributor to Fraud Cafe.com, a consumer protection and advocacy forum.